Food safety is a global concern that refers to handling, preparing, and storing food as per SOPs to reduce the risk of becoming sick from foodborne diseases. The Punjab Food Authority PFA is operating from Punjab, a region of bright colors of life, unique culture and here people are fond of scrumptious dishes. Food has always been an important part of our tradition. And while relishing all kinds of experiences from swanky five-star hotels to a friendly next-door mobile kiosk selling contaminated tea, nobody would generally be concerned about the quality of food. The adulterators and forgery mafia are sucking the blood of the masses by injecting poison in the name of fine dining with high prices.

The Punjab Food Authority (PFA) has been working as a functional entity since 2012. The prime motive of this authority was to protect the health of consumers and ensure fair food practices. For that Punjab Food Authority came into existence. With limited resources and support of the government started facility of inspection and on-site sampling tests but keeping in view the spread of food-borne illness and need, it is now functional in all 36 districts of Punjab to curb adulteration with no tolerance policy against all those indulges in these malpractices.

There have been various laws implemented by Punjab Food Authority about food safety and food hygiene. We as a part of this society and responsible citizens must acknowledge good work and criticize the bad policies of the government. Food quality and safety are essential aspects of the right to safe and healthy food which is a fundamental human right. The importance of this authority can never be undermined as it is regulated by Punjab Pure Food Regulations in Punjab province.

The former Director-General of Punjab Food Authority Noorul Amin Mengal and their teams had worked day and night to get rid of the adulteration mafia. Under his leadership and proper guidance, Punjab food authority food safety and vigilance teams can take strict action to ensure implementation without considering pressure groups from banning carbonated drinks at educational institutions, banning gutka, betel nut, smoking corner at restaurants, and open spices which have played havoc with masses to the provision of Lacto scan machines for free milk testing in seven major cities.

Likewise, social media is a very powerful medium which has connected audience worldwide. Not just to create awareness among the masses, but to inform them about everyday activities. The Punjab Food Authority’s official Facebook Page is updated with all videos which exhibit regular food raids under the vigilance of teams. It is a platform that allows direct communication and engaged the public at the grass root level. The complaint portal has been enabled for the audience to inform instantly about food business operators for violating rules and regulations under the Punjab Food Authority Act. Punjab Food Authority Facebook Page has been awarded as the fastest responsive badge for responding and lodging people’s complaints on time so that action can be taken instantly.

Following the slogan of providing healthy food “From Farm to Folk”, Punjab Food Authority DG Rafaqat Ali Naswana introduced a law of star grading system through which certificates will be issued to the restaurants mentioning the grades they fall.  This will help the customers understand to choose between hygienic and contaminated food for human consumption.

Lastly, PFA feels its priority to ensure wholesome food on the doorsteps of citizens and betterment of food industries, to save precious lives from several health hazards. Other organizations should also work like this to make Pakistan healthy and prosperous.

I would like to shed light on some serious issues about the remaining food left in restaurants and hotels. Some food regulations must be designed and implement in such a way that all food left must be supplied to unprivileged people. This would be a great step to feed hungry and poor citizens of our country. 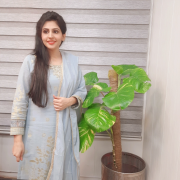 The author is a Social Media Manager at Punjab Food Authority (PFA), Lahore.